Review: One Foot in the Grave (Night Huntress series #2), by Jeaniene Frost 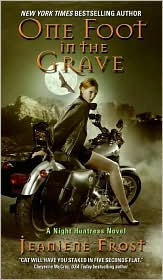 This second novel in the Cat & Bones series is packed with even more action, romance, and plot twists than the first!  The storyline moves swiftly and skillfully, keeping readers’ attention riveted to the pages.  The fighting is fierce, the sex is steamy, and the plot continues to bring on the surprises.  Do yourself a favor and add this one to your “must read” list!

After a painful 4-year forced separation from the love of her life, Cat finds herself once again face to face with Bones… the vampire who taught her everything she knows about loving, fighting, and life as an undead.  The Red Reaper has a price on her head now, and Bones is back to make sure it stays in one piece, literally.  Cat must decide whether to accept him fully back into her life (and bed) or continue trying to keep in at arm’s length as they fight side-by-side to defeat new enemies and defuse clever new traps.

In Ms. Frost’s second Night Huntress novel, we get to meet Ian, Bones’s vampire sire and good friend since they were both humans.  Spade is also back, briefly, and we get a glimpse of the mysterious Mencheres, who we’ll get more info on later in the series.  Now that Cat’s team of special ops vampire killers is up and running, we get to meet some great new characters who will pop up here and there in the rest of the series, and we learn more about vampire society and Cat’s heritage as a half-breed.

The plot of this book moves a lot like Cat & Bones both do – quick and to the point, with a dramatic flair.  Even the beginning chapters, before Cat sees Bones again, the story is enjoyable and spirited.  Ms. Frost is smart in making her heroine and hero strong and like-able on their own, without needing to be constantly paired up in order to drive the plot.

I don’t want to say much more because there are some really fun plot twists in this story and I’d hate to spoil them.  *wink*  HOWEVER, I will say this… DO NOT SKIP CHAPTER 32!!  You’ve probably noticed that I’m writing this review after the review for C&B #5 that just recently released.  I decided to go back and re-read the first books and write reviews on them for any potential readers new to the series.  Chapter 32 of One Foot in the Grave has become one of Jeaniene Frost’s most well-known passages.  It’s sexy, ballsy, and pushes the boundaries of what we have come to expect in contemporary romance scenes, without (in my opinion) being too over-the-top or unbelievable (okay, respectively – he IS still a vampire!).  If for no other reason than to read this chapter, you absolutely MUST MUST MUST read Halfway to the Grave (Cat & Bones #1) and then this one!  After that, I’m certain you’ll be just as excited about these books as I am… and the legions of Jeaniene Frost fans out there!!

If you like Cat & Bones (Night Huntress series), you might also like the Cassandra Palmer Pythia series by Karen Chance or the Black Dagger Brotherhood series by J.R. Ward.  The Southern Vampire (Sookie Stackhouse) series by Charlaine Harris is also somewhat similar in its early books, but becomes too politically mired in the later ones to keep up the fast pace that the Night Huntress series is known for.

The Cassie Palmer books are a crazy-fun trip through chaos, danger, time-travel, & vamp/mage politics, with a little romance on the side.  If Cat & Bones are your favorite couple, you’ll probably also like Cassie/Mircea/Pritkin (yeah I know that sounds weird- read it and you’ll see what I mean!) and several of the Black Dagger Brotherhood pairings.

There aren’t many one-liners in this book, and it’s difficult to pull out sections of the in-between-action scenes without giving away parts of the plot, so I don’t have as many quotes for you this time…

Grendel wasn’t in as jolly a mood.  He got to his feet, rubbed his throat where the skin was healing back into place, and gave me a very unpleasant look.

“You will pay with pain for that.”

What was I supposed to say?  It wasn’t good for me, either?

(Bones) “Congratulations on a magnificent display of unsportsmanlike conduct.  What a dirty fighter you are.  Somebody really skilled must have trained you.”

I laughed even though it hurt.  “Yeah.  An arrogant bastard.”

I enjoy all of the Night Huntress series books, including the expanded world ones (Spade & Mencheres), but One Foot in the Grave is one of my favorites… not just of this series, but of all the books I’ve read in general.  This one and the next two have a really dynamic chemistry to the characters and story arc that just draws you in and keeps you there.  I can go for days at a time with my nose in these books, completely forgetting about everything else (which really annoys my husband! hah).  This series is quite distracting!

Cat & Bones are one of my absolute favorite couples in paranormal romance (or any romance, really).  I don’t know if it’s her independence and temerity, his confidence and charm, the fact that they’re both kick-ass fighters, or the combustible sparks between them, but something about this chemistry is just RIGHT.  READ THIS SERIES!!

It’s really tempting to give this one 5 fangs, and I’m still not sure it doesn’t deserve a full 5!

Sue Brown-Moore is a freelance developmental editor specializing in romantic fiction. Sue is a passionate feminist and has always been a champion of romance—in her past life, she ran a review blog and a podcast—and believes that every body deserves a happy ending. She loves chatting about books and is always looking for excellent new recommendations. Reach out to Sue on Twitter and Instagram @davincikittie, Facebook @TheRomanceEditor or join her Patreon group, The Romantics (@TheRomanceEditor), for editorial insight and author coaching. Find Sue online at: The Romantics on Patreon DaVinciKittie.com Instagram Facebook Twitter The Infatuated Podcast Gravetells Romance Blog END_OF_DOCUMENT_TOKEN_TO_BE_REPLACED
This entry was posted on Sunday, March 6th, 2011 at 11:55 am and tagged with bdb, black dagger brotherhood, bones, book, cassandra palmer, cassie palmer, cat, cat & bones, charlaine harris, J.R. Ward, jeaniene frost, keren chance, night huntress, novel, one foot in the grave, paranormal, review, romance, series, sookie stackhouse, southern vampire chronicles, vampire and posted in 4+ Fangs, 4.75 Fangs, Jeaniene Frost, Night Huntress (Cat & Bones). You can follow any responses to this entry through the RSS 2.0 feed.
« Review: This Side of the Grave (Night Huntress series #5) by Jeaniene Frost
Spoiler: True Blood Season 4 – what fans have been hoping for! »