Review: Born of Night (The League series #1), by Sherrilyn Kenyon 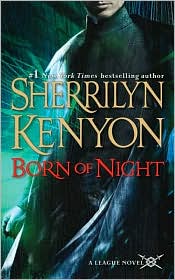 An ex-League assassin with multiple contracts out on his life, Nykyrian Quiakides fears neither danger nor pain.  A reknowned dancer and daughter of a prominent political leader, Kiara Zamir is sheltered but strong after the torture and murder of her mother as a child.  When political schemes put Kiara in the sights of  some of the Ichidian universe’s most vicious hunters, Nykyrian and his crew are hired to protect her, and he gets way more than he bargained for in the process.

One of the pioneers of the futuristic and paranormal genres in the ’90s, Ms. Kenyon is well-published and -celebrated with over 40 novels across 6 different series.  It’s daunting, choosing a place to start, and I couldn’t be happier with The League series as my introduction to Ms. Kenyon’s style.  Born of Night was one of the first novels she wrote and was originally released through a different publishing house than she uses today.  If you’ve read BoN or #2 in the series, Born of Fire, you know that the timelines for these two stories are concurrent.  Because they were originally published by different houses, she had to change some of the names and timelines so that the two works appeared unrelated.  In 2009, Ms. Kenyon was able to re-release these two novels and begin telling the rest of the story, and she adjusted the timeline and character names to fit her original plan.  SO, if you read BoN (or BoF!) when it was first released in the ’90s, give it another go and get caught up on the current state of The Sentella’s affairs!

I haven’t previously read a futuristic romance before (no wizards, vampires, or demons!), so the first few chapters of this novel were somewhat difficult to immerse myself in.  It reminded me a lot of the Star Wars universe, with multiple habitable planetary systems, alien races (more than a few humanoid – does “Andarian” make anyone else think of annoying blue-skinned guys with antennae?  Yes yes, I know, Andorians are Star Trek not Star Wars!), and advanced tech (spaceships, blasters, etc).  The story also reminded me a little of Star Wars, with the disreputable (but skilled & crafty!) hero taking on a paid mission to protect a beautiful (yet strong & independant) heiress, then falling in love against their better judgement and running from any and all authorities in the galaxy as they both become hunted.

The emotional impact of this story is tremendous.  Neither Nykyrian nor Kiara has been spared hardship and suffering throughout their lives, but Nykyrian’s past is the gift that just keeps on giving… in bad ways and good.  I’ve already read through the next three League books and I’ve noticed that torture seems to be a theme for these poor guys.  In all three novels, the hero has suffered extreme torture of some sort, either in his past or during the story, and the heroines get a dose of  pain too.  Ms. Kenyon’s mastery of these characters makes it easy to get into their heads and to let them into your heart so you feel empathy for the ringer they are put through, both physically and emotionally.  That’s the hallmark of a good author, right?  To make you able to feel and understand, but Ms. Kenyon goes above and beyond to make experiencing this novel a real treat for the readers.  Spanning the gamut of emotional and physical developments, the novel Born of Night is very nearly an epic story… aaaalmost (using true epics such as Lord of the Rings as a standard)!  *wink*

An assassin’s take on love…

And he was born of night.  His mother was the darkness, her cold embrace was all he had a right to crave.  Just as the sun destroyed the night, he was sure she would destroy him, provided their enemies didn’t kill her first.

If you enjoyed Born of Night by Sherrilyn Kenyon, you should check out the Psy-Changeling series by Nalini Singh.  Both series are futuristic and emotional, with very strong male leads and independant females.  The much-anticipated 10th novel in the series, Hawke & Sienna’s story “Kiss of Snow”, will hit bookshelves later this month.  If you’re a speedy reader and start now, you can finish books 1-9 in time to get caught up in the hype!

If you’re a regular reader of my blog, you probably know what I’m going to say next.  *grin*  If what you liked about Born of Night was the emotional ride, then definitely check out the Black Dagger Brotherhood by J.R. Ward.  Ms. Ward is a master of drawing in her audience emotionally and keeping us enthralled.  Her sex scenes are pretty hot too.  *wink*  The BDB is not futuristic, however, so if more of that is what you’re looking for…

This may sound silly, but even with the massive exposure of Star Wars across our culture, I STILL meet people who have not ever read or seen Star Wars!!  I know, craziness!  It’s almost unfathomable to me, who grew up memorizing and re-enacting “Return of the Jedi” weekly in my back yard!  If you are one of the Star Wars deprived, do yourself a favor and watch (not read, not yet – watch it first!!) Episodes 4 (A New Hope), 5 (The Empire Strikes Back), & 6 (The Return of the Jedi) of the original Star Wars trilogy.  Yes, I know it might sound like it makes more sense to start with Episode 1 (The Phantom Menace), but trust me on this… Ep.4 first, THEN Ep.1!  Star Wars is set in a galaxy far far away, is futuristic (ignore the “a long time ago” bit), and has space battles, smugglers, political intrigue, and romance.  So basically Born of Night, with less emphasis on the romance and more emphasis on the overall picture (and with Jedi & lightsabers, woo!!).  =)

If this is an example of Sherrilyn Kenyon’s early work, I am very excited to read some of her more recent series, considering all the time she’s had to hone and master her craft.  The publishing world is vicious to career authors, especially in the romance genres, and the sheer number of novels and series Ms. Kenyon has created speak volumes about her skill.  I would like to give this story a 5 fang rating, based on its nearly epic span of struggles and events and the depth of the emotions it portrays, but I had some trouble assimilating into the story at the start of the book.  4.75 fangs it is!  =)

Sue Brown-Moore is a freelance developmental editor specializing in romantic fiction. Sue is a passionate feminist and has always been a champion of romance—in her past life, she ran a review blog and a podcast—and believes that every body deserves a happy ending. She loves chatting about books and is always looking for excellent new recommendations. Reach out to Sue on Twitter and Instagram @davincikittie, Facebook @TheRomanceEditor or join her Patreon group, The Romantics (@TheRomanceEditor), for editorial insight and author coaching. Find Sue online at: The Romantics on Patreon DaVinciKittie.com Instagram Facebook Twitter The Infatuated Podcast Gravetells Romance Blog END_OF_DOCUMENT_TOKEN_TO_BE_REPLACED
This entry was posted on Tuesday, May 17th, 2011 at 9:00 am and tagged with andarian, assassin, Born of Fire, Born of Night, dancer, futuristic, Ichidian, Kiara, Nemisis, Nykyrian, Quiakides, romance, Sherrilyn Kenyon, Star Trek, star wars, Syn, The League, The Sentella, universe, Zamir and posted in 4+ Fangs, 4.75 Fangs, Sherrilyn Kenyon, The League. You can follow any responses to this entry through the RSS 2.0 feed.
« Q&A with Deborah Harkness on ‘A Discovery of Witches’
True Blood S4: Mmmm trouble (in Bon Temps)! »

One response to “Review: Born of Night (The League series #1), by Sherrilyn Kenyon”