Fans attending this years Comic Con True Blood panel were treated to a generous gathering of the stars of everyone’s favorite vampire soap opera.  Traditionally, True Blood is  one of the few panels that routinely offers up such a large number of its cast for the Q&A session and this year was no different, with Alexander Skarsgard and Anna Paquin in attendance to spark questions about the possibility of fans finally getting to see the infamous “shower scene”.  To our collective overwhelmingly-excited-anticipation, the answer to that is (from Alan Ball)…

“There will be a moment in the show when Sookie and Eric are together in a shower,” he said. “It may not exactly be what happens in the books. It may be weirder… and dirtier. Maybe.”

When asked if Sookie has multiple personalities, referring to her upcoming change of attitude toward Eric and the show’s other vampires, Anna Paquin quipped…

“Part of her has really dirty vampire sex on a regular basis — with possibly multiple vampires.”

Eagle-eyed viewers noticed some wardrobe inconsistencies for Eric in the first episode of the season.  Not too many complains about the shirtless & shoeless hunk wandering the roadside near Sookie’s house (why missing just the shirt and shoes?  Eh, who cares!), but how does Sookie just happen to have a warm-up suit that will fit a 6’4″ Viking vampire?  Alexander Skarsgard suggested maybe it’s somehow one of Hoyt’s via Jason, but Alan Ball cleared the air on this one…

“I believe that if you took the Latin of the spell that was cast on Eric and were to translate it,” Ball explained, “there would be a part that said, ‘And by the way, you will lose your shirt, and then you will find a really dorky outfit that you will wear for several episodes in a row … and still be insanely hot in.'”

Of course, one of the best things about Comic Con is getting to see the preview clips of the upcoming films and television seasons.  Here’s the teaser trailer for what’s coming up in Season 4!

Wanna see the panel Q&A?  Check out the videos below!  (Courtesy of magicinthenumbers’s YouTube channel) 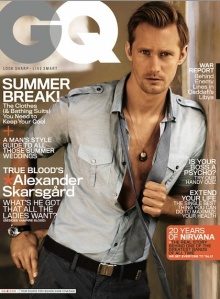 “Out of the misty north there arrived in Hollywood a fair-haired stranger: Skarsgård the Younger, Alexander the Tall, son of Stellan the Comparatively Famous. With his totally convincing American accent and eyes deep as a glacial fjord, he won over fans of HBO’s True Blood. Now, with three major films opening soon, Alexander Skarsgård is poised to conquer the rest of us.”
Written by Brett Martin of GQ magazine, this interview with everyone’s favorite Viking is told as more of a narrative than a question-answer session.  On a whale-watching tour with Alex, during which they see no whales but “some great bird activity”, Martin quizzes Skarsgård about early life as the son of a famous Swedish actor, monkey business on the True Blood set, his upcoming film projects, and rumors of his involvement with Kate Bosworth.  In a quirky, sometimes self-deprecating, retelling of their uneventful jaunt at sea, Martin paints a picture of a man who, while on the fast track to Hollywood superstardom, is still surprisingly real and grounded.  Read on for snippets from the article, or go here to see it in its entirety!

Every day they observe what is known as the Roll Out, in which Stellan and whichever children are around escort the clan’s 81-year-old matriarch, Gudrun, in her wheelchair to a hallowed old beer hall named Kvarnen that functions as fan headquarters for Hammarby, the local soccer team and one of Skarsgård’s obsessions. Gudrun will have one beer and two shots of Fernet-Branca. (“She’s over food,” Skarsgård says.) Later Stellan spends the rest of the afternoon cooking, his primary passion. The tribe gathers once again for dinner and wine.

Skarsgård is the first to poke fun at the notion of the Swedish military, which saw its last serious action around the time of the Northern War, 300 years ago, but it was an important challenge for him. “It was my way of going off into the unknown,” he says. “I didn’t want to just be somebody’s son.”

On playing Eric in True Blood…

In True Blood’s ever expanding ensemble of fairies, werewolves, shape-shifters, telepaths, werecats, telefairies, vamp-shifters, and God knows what else, his Eric has become a solid center—the only character to display that essential quality shared by great HBO antiheroes past (think Tony Soprano or Omar Little or Al Swearengen): genuine unpredictability. Skarsgård’s minutely calibrated deadpan somehow makes him the show’s funniest, most cerebral, and most ferally frightening personage. “He does this thing with his eyes,” says creator and show-runner Alan Ball. “It’s like they become slightly unfocused and all of a sudden they’re mirrors to this ancient, 1,000-year-old soul.” Indeed what Eric is, his relative humanity, may be the only moral mystery to be found amidst all the steamy, gothic froth.

Not that Skarsgård emerges suds-free. Those rooting for Eric in the increasingly explicit love-blood triangle he shares with Anna Paquin’s Sookie Stackhouse and Stephen Moyer’s Bill Compton are surely aware of the extra frisson provided by Paquin and Moyer’s real-life marriage. Does it also mean on-set awkwardness?

“It’s really clear to Steve and to everybody else what the deal is—which is that Anna is like a sister to me,” Skarsgård says. “Those love scenes take quite a bit of acting, actually. A lot of acting.”

On his role as Charlie Venner in the Straw Dogs remake…

…in which Venner rapes Amy, who is played in the remake by Kate Bosworth. Tabloid followers will be aware of the widely reported news that Skarsgård and Bosworth are romantically involved. (When asked about the relationship, he shuts down, smile disappearing, with a completeness and efficiency that could only come from growing up in the public eye. “My father always kept the family out of the press,” he says later, almost apologetic.)

It was, by all accounts, a brutal scene to film, taking place over two days.”In the beginning, Kate would be crying after every take and Alex would try to comfort her,” says Lurie. “By the end, everybody got really raw.”

When the film was in postproduction, Skarsgård brought his father for a visit to the editing room at Sony studios, and they watched the scene as it was being cut together. “They seemed more like best friends than father and son,” says Lurie. At the end, Stellan stood up and spoke those words every boy longs to hear. Says Lurie, “He proclaimed it ‘the best rape ever filmed.’ “

On acting, and the difference between the Swedish and Hollywood cultures…

“Hollywood can be like kids playing marbles on the schoolyard,” he says. “Everybody wants the shiny marble until one kid says he doesn’t. Then nobody will touch it. So it’s important that I make good decisions now. “

That doesn’t mean he has trouble ricocheting from the highbrow world of von Trier to the soapier True Blood; nor way beyond, to the green-screen-and-explosion bonanza that Battleship promises to be. (You were expecting Strindberg’s take on a board game?) “If you’re an actor in Sweden, you do drama, you do comedy, you do action, you do film and live theater. You do whatever there is,” Skarsgård says. “Vanity is death to an actor.” Ball describes him as “the least actorly actor I’ve ever met.”

Now for some eye candy!  Here are the photos published in GQ (and a couple that weren’t… in my copy at least!)

Oh, and as an extra juicy tidbit, fans of Fox’s hit show Glee will be excited to know that June’s issue of GQ also features a wedding fashion spread on Darren Criss, better known as mega-crooner Blaine Warbler. Click here to see him in GQ, or check out some of the photos below…

Which of our favorite characters will be causing trouble this season?  Oh, you can bet on just about all of them. *grin*

Click play below for a yummy “screen test” of the familiar faces.

No spoilers this time, Scout’s honor! 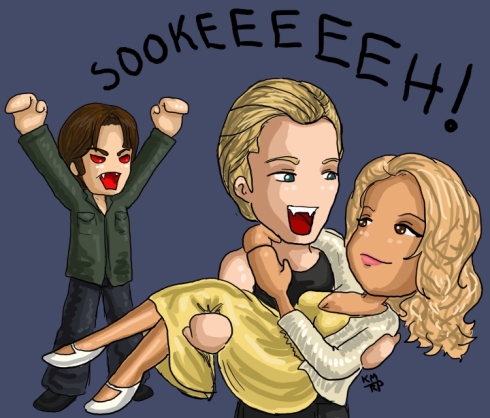 Will this be the season of Eric & Sookie, or will we be seeing even more (har har!) of Bill?  Can’t say for certain, but I’m crossing my fingers for Team Eric!  (PS: the cute little image above is by iluvbsbkevin on DeviantArt… adorable!)

Here’s an awesome fan-made video montage to Slipknot’s “Snuff”.  It’s well done and the flow of the video fits the song.  Enjoy the trip down memory lane!  *grin*

True Blood S4: An Invitation to the Set

This week, Alan Ball and the cast of True Blood Season 4 take us on set for an inside peek.  Check out the video below, but beware spoilers!  This video will include small bits of info about this season’s story, so if you don’t want to know, don’t click!  =)

If you aren’t already a subscriber to this blog, enter your email in the box on the right side panel (or click “Sign me up!”), and get new blog posts in your email!

HBO has officially announced the start date for the new season (4) of True Blood.  A fan-made poster caused some initial confusion when it claimed the start date would be June 12, but the official word came the next day, stating that the show’s fourth season would commence on June 26.  That’s a long time to wait – longer than in previous years!  On the sunny side, Executive Producer Gregg Fienberg clarified that there will be no break between episodes this season, allowing the momentum of the show to continue more smoothly!  So waiting might suck for now, but it’ll all be worth it once we get our first glimpse of the new season on the now-much-anticipated 26th of June.

In the mean time, HBO is releasing a series of “Waiting Sucks” videos to keep us all enthralled and tuned in.  I posted one last month featuring Eric; here’s one with Pam, Tara, Lafayette, Jesus, & Marnie (a newbie).  Pam’s bustier is SEXEH!!

(skip this if you don’t want a spoiler!)

Spoiler: True Blood Season 4 – what fans have been hoping for!

WARNING: THIS IS A SPOILER!

Stop reading now if you do NOT want to see a clip of/know about upcoming footage from TB:S4!

Team Eric, rejoice!  It looks like S4 of True Blood is indeed going to be the same storyline as the 4th Sookie Stackhouse (Southern Vampire Chronicles) novel, Dead to the World.  You know, the one where Eric ends up walking naked along Sookie’s road with no memory of who he or anyone else is?  In this clip he’s not naked, just shirtless, (which is surprising, considering HBO doesn’t usually miss an opportunity to show the TB stars in the buff) and the footage is still raw, but if this is for real, then it looks like Sookie & Eric time is definitely on the horizon.  Hooray!

Yes, HBO, waiting does suck!  Make it worth the wait!

Dead to the World on Amazon.com