Leila has some unusual abilities, too, but I can’t say more about those until I’m allowed to release the book description.

And of course, we all want to know the release date now that it’s really for real!  Sheesh…

ONCE BURNED is tentatively scheduled to release on March 29th, 2012, assuming I can finish it soon. Cross your fingers for me

We definitely will.  *wink*  And you can bet on legions of Cat & Bones fans eagerly hitting bookstores on release day to devour the new Vlad novel (myself included)!  =)

One Grave at a Time: newest Night Huntress book trailer and excerpts! 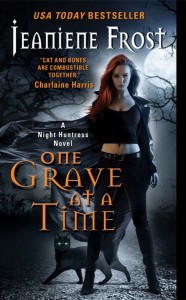 For Cat & Bones fans, the wait for Book 6 is nearly over.  One Grave at a Time doesn’t hit bookshelves until the end of this month (August 30th), but impatient readers can get an early glimpse of the first three chapters on Ms. Frost’s website.  To spoil or not to spoil, that is the question!  Actually, it’s more like “excellent impulse control or rabid pleasure seeker?” because anyone who’s already a fan of this series is going to have a tough time not taking a peek!  If you’re of the “give it to me now!” camp, click here to read the teaser chapters.

Whether or not you choose to indulge in the chapter previews, you can safely check out the book trailer sans spoilers!  (Psst – click Play below!)

Fans attending this years Comic Con True Blood panel were treated to a generous gathering of the stars of everyone’s favorite vampire soap opera.  Traditionally, True Blood is  one of the few panels that routinely offers up such a large number of its cast for the Q&A session and this year was no different, with Alexander Skarsgard and Anna Paquin in attendance to spark questions about the possibility of fans finally getting to see the infamous “shower scene”.  To our collective overwhelmingly-excited-anticipation, the answer to that is (from Alan Ball)…

“There will be a moment in the show when Sookie and Eric are together in a shower,” he said. “It may not exactly be what happens in the books. It may be weirder… and dirtier. Maybe.”

When asked if Sookie has multiple personalities, referring to her upcoming change of attitude toward Eric and the show’s other vampires, Anna Paquin quipped…

“Part of her has really dirty vampire sex on a regular basis — with possibly multiple vampires.”

Eagle-eyed viewers noticed some wardrobe inconsistencies for Eric in the first episode of the season.  Not too many complains about the shirtless & shoeless hunk wandering the roadside near Sookie’s house (why missing just the shirt and shoes?  Eh, who cares!), but how does Sookie just happen to have a warm-up suit that will fit a 6’4″ Viking vampire?  Alexander Skarsgard suggested maybe it’s somehow one of Hoyt’s via Jason, but Alan Ball cleared the air on this one…

“I believe that if you took the Latin of the spell that was cast on Eric and were to translate it,” Ball explained, “there would be a part that said, ‘And by the way, you will lose your shirt, and then you will find a really dorky outfit that you will wear for several episodes in a row … and still be insanely hot in.'”

Of course, one of the best things about Comic Con is getting to see the preview clips of the upcoming films and television seasons.  Here’s the teaser trailer for what’s coming up in Season 4!

Wanna see the panel Q&A?  Check out the videos below!  (Courtesy of magicinthenumbers’s YouTube channel)

Lover Unleashed, Payne’s book (#9 in the Black Dagger Brotherhood series), releases this coming Tuesday, March 29th.  Starting yesterday, Ms. Ward is posting a video teaser each day on her Facebook page, giving us little snippets about Payne and the book.  I haven’t been able to link them here, so to see the videos (which are about 15 seconds each, or less), search Facebook for “J. R. Ward” and click her name in the search results (her current Profile Pic is the cover of Lover Unleashed, so it’s hard to miss!).

100% of the profits from the sale of BDB merchandise go to support animal charities.  Want to see a preview of what’s in the store?  Look below!

If you haven’t yet read through the end of Lover Enshrined (#6) beware the spoiler at the very bottom of this post.  =)

If you have NOT READ LOVER ENSHRINED (BDB #6) and do NOT WANT TO SEE A SPOILER, ignore this next image!!